English with my kids, week 8

Let’s face it, we had a bit more than a week break. I guess I needed to focus on something else other than ESL teaching for the week. But still, I keep on teaching ESL at home and… I think I like it.

After a long break, I wanted to start with some resources K. knows. So we used this one that we already used in week 6 and comes from “The question game“.


We used the card about Moms, and came up with the following questions : 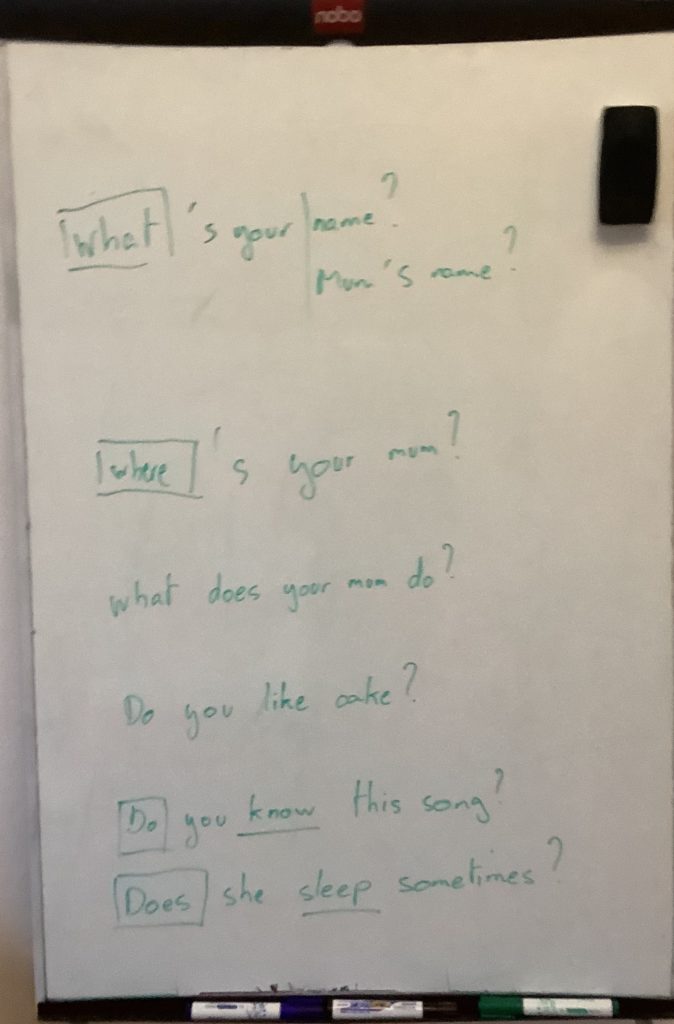 Then we went back to my favorite verb game: Tic-Tac-Irregular.

According to her textbook, K. is starting to discover the simple past with her teacher. At this point, she knows “was” and “were”, but more verbs will come soon. This implies the discovery and use of irregular verbs.

That’s why I consider it very important that she starts learning the meanings of irregular verbs, most of which are here:


(If you need, you can get the original copy, without the blue circles here.)

We started by listing the verbs of the second section that K. knows (she already knows all of the first section, in the center of the game).

Then, we opened the vocab booklet we started on week 7, and we added three verbs: cost, break and bite. We always write down verbs with a sentence in the TL, without translation. 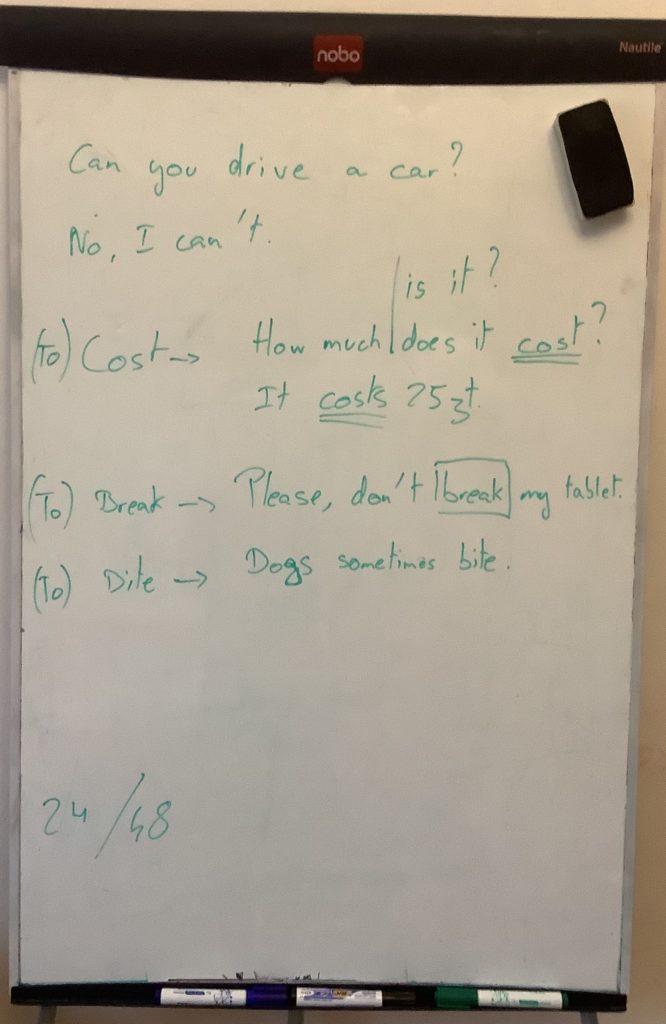 There is a test coming up at school and K. has to review “dialogues in a shop.” Based on dialogues in her textbook, I prepared the following pdf:

in a clothes shop


First page is the basic version. Second page is a more creative one with much more possibilities.

The basic idea is to create dialogues, using the given elements. Basic, right?

But here, you don’t have a single possibility. You can create several dialogues with various beginnings and ends.

In this precise example, you can start with any of the two sentences in the circles.

We had a lot of fun, especially with the second version. Then we wrote two words from those dialogues in the vocab booklet: cheap and expensive (including cheaper, the cheapest…) This is how it looked at the end.

in a clothes shop

We are having a tough time here for various reasons, and we haven’t been learning regularly for quite a while. I also didn’t take notes, which makes it hard to show you what we did.

What I can tell you is we are working on the past tense as K. is learning this at school.

We keep using our favourite verb-game.

We also used this resource to practice comparing things. That is not an easy one for K. as there is a lot of freedom in it :

We also keep on filling our vocab booklet with new words, but frankly, that’s about it.

I think I have to admit I won’t make it till the end. Although we have been working on our ESL goal during the last two weeks, there is not much I can write here.

We had some days where we just had 5 minutes before going to bed: “what did you do today ?” This helped a lot. The more we go, the more I see that 5 minutes a day makes a huge difference. K. uses properly “did” in questions and “didn’t” for the negative form. The main problem which remains is irregular verbss.

We also started to use the resources that are being prepared for the shop. There are packs of ten mini activities coming soon to the shop, and they are amazing. You can already see examples oh it here and here, but those are about the present perfect and too hard for K. But the pack called shops (soon to come) is exactly what we needed. Here are two samples I can show you, even though they are not 100% ready.

As you can see, every screen is based on a simplified and and themed version of a resource found at the shop.

This one is based on gramminoes:


This one is based on the question game:


This one is inspired by the sms game, but in an easier version where you just have to match sms with one another.


All of those required no prep time for me, and were really enjoyable as they require some creative use of the TL. Even with the SMS game, K. made some changes by herself so SMS would match (which is not the idea of the activity, but why not ?).

To be honest, I am not sure if I will manage to keep on with writing the blog. In case I do, all future and past posts can be found here. Anyway, I hope this helped you and gave you some ideas of what you could do to help your kids learn english as a foreign language.

Love upon you all 🙂

PDF : in a clothes shop

Already a subscriber? Don't worry, nothing will change!

You have Successfully Subscribed!

French French teacher. Husband, father, day dreamer, guitar player, Zexpert fever. I specialize in having too many ideas at the same time. I believe love can make the world a better place.