English with my kids, week 2

Some people have problems getting started. I always find starting something new is quite easy until it gets difficult. Second week, the easy part is over, now it’s about learning every day. Consistency is my enemy, and I shall fight it.

Epic fail. I didn’t get ready in time.

Today, I planned an activity I used very often when teaching French. You can find the original here, just in case. The idea is to keep on practicing the negative form, as well as the modals can, must and have to. Here is the file I created:

Here you can find the nice version Pierre-Marie redesigned for me. You can download it at the end of this post.

can must have to


The concept is fairly easy, as you have to associate beginnings and ends. It’s not so much about grammar, though. It’s about saying something about yourself. But still, there are many opportunities to develop and repeat known grammar and vocabulary.

I am beginning to see a difference in K. as she tries to communicate. Success! She wants to use the TL to express herself. Things are going well.

By the way, I gave her three words, as you can see in the picture: “but”, “because” and “so”. I find those words to be extremely helpful in daily conversation, and, in this exercise, you need them (“I dont’ walk the dog BECAUSE I don’t have a dog”. “I like to play the piano, SO I play the piano”…)

K. has been hearing about present continuous at school for a while but is hardly aware of its function. Also, she is unable to utilize “short answers” or ask questions in context because she is only able to do so in written exercises that tell her exactly what to do – “gap-filling” and “prescriptive learning” what else?

Never mind, just some things to add to the list. Today, I decided to start with verbs. Actually, I think it’s pointless to learn any grammar stuff when kids actually don’t know any vocab they can easily use. I consider that a firm knowledge of a few vocab items (let’s say 200-300 words) is needed to teach any grammar. This way, learners can concentrate on understanding the grammar rule, rather than being blocked by those unknown words in any given example.

So we started today without any material. I took a piece of paper and asked K. to write all the verbs she could think of. Of course, I had to give examples of what “verbs” are.

This is what we got : 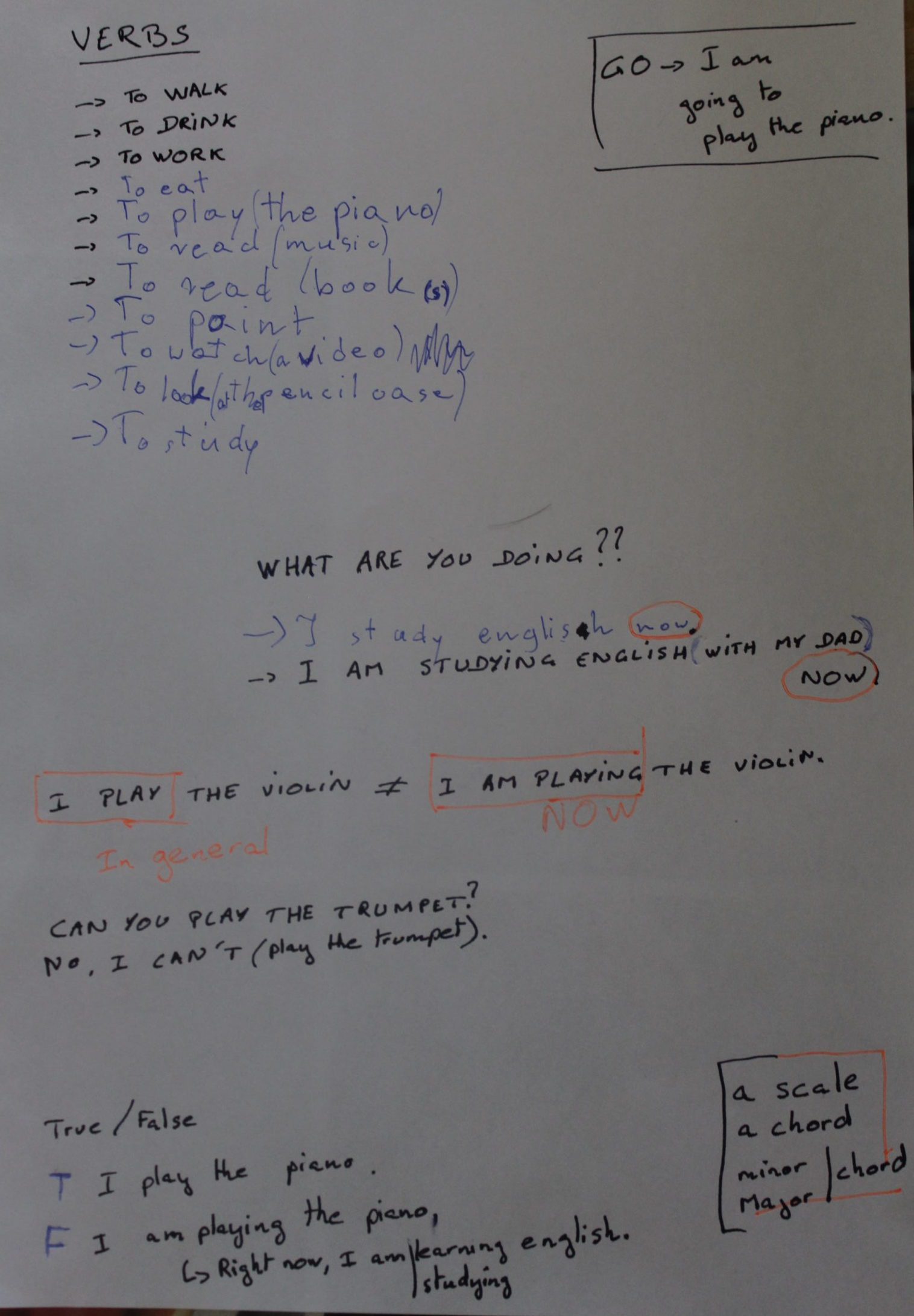 Then, I used the question “What are you doing ?” which I had to also say in French. Based on this, we studied the difference (in meaning, as the construction is fairly easy and was studied in class) between present simple and continuous.

We also had the possibility to use “can”, as well as the structure “I am going to” which is exactly identical to the french “je vais”.

Basically, the idea is to try to interact in TL within a near-normal conversation. Seems to work for now.

We did today exactly what we did yesterday, but K. had to look for verbs in her textbook. This is what we got :

Again, I started with the question “What are you doing?” Again, K. didn’t know what this question meant, so I had to say it in French yet again. After that, I asked what she thinks her brothers are doing, which led us to practice “his” and “her.” (Important point: I don’t expect this will be remembered, but I expect that if we use this often over a period of time, she will master it easily at some point)

During the day, I went a few times to K.’s room, just to ask “What are you doing?” Guess what? She understood and was able to answer and use the present continuous (sometimes :p )

I was hoping we could do more, but again, I failed.

Never mind, on the weekend I asked several times “What are you doing?” and it brought results. Let’s see what next week will bring.

Already a subscriber? Don't worry, nothing will change!

You have Successfully Subscribed!

French French teacher. Husband, father, day dreamer, guitar player, Zexpert fever. I specialize in having too many ideas at the same time. I believe love can make the world a better place.